The Labour Party has released its plans for UK housing and what they propose to do about it. Time to have a critical look at what this 44 page Green Paper says and what it doesn’t say.  It needs to rip it up and start again as a matter or urgency as it is replete with critical errors of fact and it prioritises landlords over social tenants.

For the many not the few Mr Corbyn?  Its more Housing for the money and for the Feudal!

There is much to be welcomed in this set of proposals such as getting rid of the ‘affordable (sic) rent’ level, the freeing up of councils to borrow to build, suspending the right to buy, the recognition that housing associations are a small player and the UK housing sector can only solve the housing crisis through council housing building, and the general recognition that affordability has at least the same priority as supply in the UK housing crisis – all issues I have called for.

Yet there are a number of critical problems with this set of proposals that make up Labour housing policy and they need to go back to the drawing board as those problems are of such significance. I have been a consistent critic of Tory housing policy and Tory housing benefit policy and I always use facts and numbers to criticise both and objectively so and now it is the turn of the Labour Party – and they do need to rip up this document and start all over again because they have got so many critical facts wrong in this Green Paper.

The link between housing benefit and (genuine) affordability

The GIGO principle – garbage in garbage out – applies and I begin where every analysis of social rented housing (the key issue) must begin that of cost and affordability and very specifically on the absolutely critical link between housing costs and housing benefit and paragraph 74 begins:

It is indeed crucial and yet the figures used in this paper are a chronic distortion and chronic understatement of the factual position that will lead to chronic consequences if Labour believes these figures and does not go back to the drawing board with the correct figures and which are easily proven to be significantly higher.

Why the need to go back to the drawing board?

Labour intends to use this errant 59% figure as a base for what it calls ‘genuinely affordable’ rent levels and so the percentage of social tenants who rely on housing benefit to pay the rent is THE most critical piece of data for the entire Labour Party housing policy. The Green Paper is ALL about what Labour considers to be a genuinely affordable rent and how it can be designed and achieved. The Labour Party rightly admits this is THE critical issue yet they have the 59% figure so wrong that whatever the ‘genuinely affordable’ output it produces from this errant figure can only be a critically wrong rent level and thus become part of the housing problem and not a solution to it.

So when the proposed “genuinely affordable” rent is set based on the errant premise that 41% find the current rent affordable when it is 50% less than this at just 27% the genuinely affordable rent level produced is a chronic distortion – and only exacerbates the current UK housing crisis of affordability rather than addressing it. The 59% figure is an estimate only that comes from the English Housing Survey – and which is significantly wrong as the EHS figures say that 59% of social tenants receive housing benefit. That figure is drastically wrong and can easily be proven to be wrong with a cursory glance at the actual SHBE figures which state the figure is 73% and almost a quarter higher than the 59% estimate (14% higher than 59% is a 23.7% higher figure.)

The EHS figures – and why they are wrong

There are 4.4 million GB social tenants (2.8m HA and 1.6m council) – a figure that nobody disputes and proven to be correct by all other official housing figures – and so this 3.216 million of 4.4 million social tenants who receive housing benefit is 73% not 59% and that is THE crucial issue for social housing.

Not just pedantry –The Labour Party Green Paper relies on the social rented sector to develop at least 50% of all new housing in its plans and for them to deliver what it calls “genuinely” affordable housing and genuinely affordable to those who use and live in social housing. Yet believing that only 59% of social tenants rely on housing benefit when the true figure is a quarter more than that at 73% gives a hugely distorted view of who lives in social housing and a similarly distorted view of what is “genuinely affordable” and the Labour Party needs to go back to the drawing board and start again such is the seriousness of this wrong percentage figure.

I cannot overstate the importance of the percentage of social tenants who receive housing benefit is to ANY plans or proposals for ANY social housing policy so when any proposal is based on a hugely errant percentage figure it can only produce a chronically errant rent figure to be deemed ‘genuinely affordable’ as is the central issue of this entire housing policy.

If you wanted to set the new price of a Mars Bar or the proverbial widget in business speak based on the premise that currently 41% could afford it when the actual figure is just 27% then you will see the number of Mars Bars bought drop hugely.  The same applies to attempting to set the Labour Party’s genuinely affordable rent level which is what this policy is all about and why the Labour Party HAS to go back to the drawing board

In paragraph 64 of this Green Paper we see some truly perverse figures that again are nowhere near the actual facts of the matter and concerning affordable rent ‘conversions’ – the Tory policy that housing associations so love of the existing tenant leaving of a Friday to be replaced on the Monday with a new tenant paying 44% for the exact same property.  The Labour Party believes that just 11,500 of these occur each year when the figure is double that.  Let’s look at what the Labour Party says which is in paragraph 64:

As you can see in my emphasis the Labour Party believes just 11,500 of these AR conversions happen each year and cite the usual expert suspects of CIH, Shelter and others when if they looked at the official figures from the housing regulator this is what they would see: – 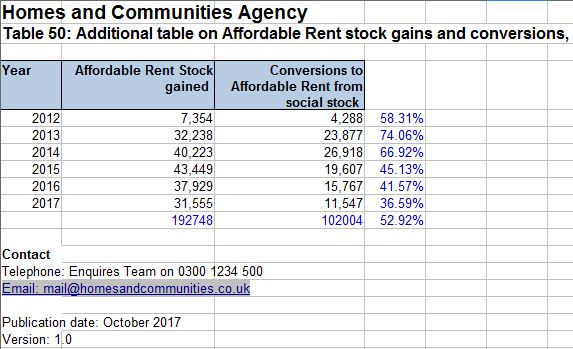 The figure the Labour party is using is less than half of the actual figure and the importance here is political and politically perverse as it not only halves the Tory policy problem and says the Tory policy is half as bad as it actually is (!!!!!) but it tells me the real reason is that John Healey as Labour’s Housing Minister is avoiding blaming housing associations (and councils including Labour-run ones) for choosing to operate the AR model and it is a choice to operate AR or not, there is no compulsion to use it at all.

That leads to the correct way to view the above paragraph 74 in a new and different light when it says “…almost six in ten social housing tenants receive housing benefit, certainty about social security payments is crucial.”  The question becomes crucial to whom – and John Healey clearly means housing benefit payments are crucial to the landlords not the tenants.  The priority for Labour is ‘social’ landlords being paid not that tenants have somewhere they can afford to live and is extremely disturbing in that priority.

I will leave further comment on this to a later date and this is more than nuance to a housing geek audience.  It is the very much Blairite John Healey imposing his version of what social housing and it rents levels should be over the wishes of both Corbyn and McDonnell and that for all Corbyn supporters seeking equity and fairness is extremely disturbing – the question of why Corbyn still has a housing minister who is as far to the right of the Labour Party as you can get and when housing is such a key policy area for Corbyn Labour is very significant indeed in political terms, and it does mean that Labour is prioritising social landlords over social tenants!

In summary anyone hoping for a radical solution to the UK housing crisis from the Labour Party will be disappointed.  Further, unless the Labour Party rips up this misguided and errant attempt to create a ‘genuinely affordable’ rent level and starts again it will be no solution to the UK housing crisis at all. Moreover, John Healey lauds a recent report by Capita Economics calling for more ‘affordable’ housing and which also said social housing rents should rise by an average of CPI inflation PLUS 1.8% per year!  My comments on that are here and show the abject greed of social (sic) landlords seeking to take a further £2.5 billion per year from social tenants. Make no mistake John Healey is only concerned with so-called social landlords and not social tenants!

Finally, this policy suggests that genuinely affordable rent level should be set at 35% of net income and compare that to the mass demonstration held last week in Berlin when thousands to the street in protest at rents being 21% of income and you realise just how much in the pocket of social landlords that the Labour Party is with John Healey as its housing minister!

Mietenwahnsinn translates as and means rent insanity and many similar protests over rent levels have been held all over Europe and Barcelona is a good example too – the basis is we cannot afford to rent in the local area – and high rent prices caused by the combination of gentrification and state or public sector inactivity is not just a London or Edinburgh or UK problem, it is endemic to much of mainland Europe and played a huge part in the Catalan Independence movement and referendum last year.

We have rent insanity in the UK and the so-called social landlords with 31.6% LA rent increases and HAs with 26.2% rent increases is the only country I can see with higher rents increases than the private landlord (19.8%) in England between 2010 and 2017.

Dear Jeremy Corbyn you need to go back and start all over again with Labour’s housing policies and before you do please make sure you appoint a new housing minister who is not in the pocket of the social (sic) landlords and who is not from the far right of your broad church of a Party and one who does not prioritise landlords over the people YOU need to vote for you, the social tenants.

Actual figures on housing benefit receipt – the 3.03 million social tenants getting it

View all posts by speyejoe2